We indeed had fun! in preparation for
“European Researchers’ Night 2015: exploring science, having fun”
we had a geometric flash mob in St Peter’s square on Monday 21st
afternoon.

The flash mob was organized by www.formulas.it, a group
of mathematicians and architects from the Department of Architecture
University Roma Tre, Italy.

Aim of the afternoon was to assess the width of the Square, and to get a feeling for the polycentric curves of the Baroque. Using some special points on the square, which are marked by a marble round, we ascertained personally the shape of the square. Then we stood in line to measure a ray of the circle composing the “ovato tondo”. It took 58 people, arms wide. The average arm width is 1.50 mt. An ovato tondo is constructed on three such rays on a line.
58×1.50×3=261 mt the actual width of St Peter’s Square is ca 240 mt.
Pretty good for an anthropomorphic measure done having fun!!!

Young blogger Alice Palombarani wrote this article about us

Here the program of all the activities 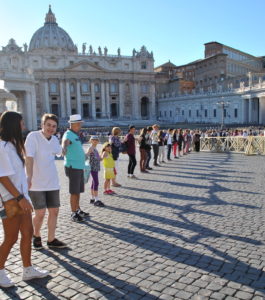 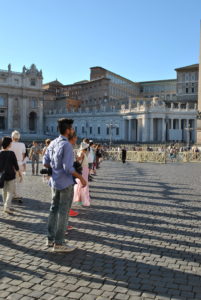