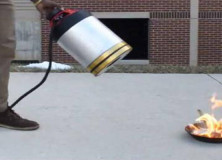 When it comes to putting out fire, GMU students show it’s all about that bass

It happens so quickly you almost don’t believe it: Seth Robertson and Viet Tran ignite a fire, snap on their low-rumbling bass frequency generator and extinguish the flames in seconds. And even after you’ve seen it over and over, it’s still unbelievable.

But the two senior engineering majors at George Mason University appear to have invented and built a way to use sound waves to put out fires. It started as an idea for a senior research project, and after a year of trial and error and spending about $600 of their own money, they have built a somewhat portable sound generator, amplifier, power source and focusing tube that would seem to have great potential in attacking fires in a variety of situations.

Robertson, 23, and Tran, 28, applied for a provisional patent at the end of November, which gives them a year to do further testing on other flammable chemicals — so far they have put out only fires started with rubbing alcohol — and to continue to refine their device. Although they originally conceived of the device as a way to put out kitchen fires and, perhaps, fires in spacecraft, a local fire department already has asked them to test their bass waves on a structure fire; they think the concept could replace the toxic and messy chemicals involved in fire extinguishers.

Robertson of Newport News, Va., and Tran of Arlington, Va., are electrical and computer engineering majors, and the idea for their senior project came about only because they didn’t like the ideas that their professors had proposed. They had seen research on how sound waves could disrupt flames, “but there’s nothing on the market that works,” Robertson said. “So we thought we could be the ones to make it happen. And that’s the inspiration for the project.”

As with all great scientific inspiration, there were plenty of naysayers, the pair said. They are electrical engineers, not chemical, and were told, “You guys don’t know what you’re talking about,” Tran said. A number of faculty members declined to serve as advisers on the project, but professor Brian Mark agreed to oversee it and not fail them if the whole thing flopped, Tran said.

But how does it work? The basic concept, Tran said, is that sound waves are also “pressure waves, and they displace some of the oxygen” as they travel through the air. Oxygen, we all recall from high school chemistry, fuels fire. At a certain frequency, the sound waves “separate the oxygen [in the fire] from the fuel. The pressure wave is going back and forth, and that agitates where the air is. That specific space is enough to keep the fire from reigniting.”

So the trial-and-error began. They placed flaming rubbing alcohol next to a large subwoofer and found that it wasn’t necessarily all about that bass, musically speaking, at least. “Music isn’t really good,” Robertson said, “because it doesn’t stay consistent.”

They tried ultra-high frequencies, such as 20,000 or 30,000 hertz, and could see the flames vibrating but not going out. They took it down low, and at the range of 30 to 60 hertz, the fires began to extinguish.

“I honestly didn’t think it would work as well as it did,” Tran said.

But the goal was to create something portable and affordable like a fire extinguisher that would generate the sound wave at the correct frequency, which they were able to do with the help of an oscilloscope that measured the waves.

They connected their frequency generator to a small amplifier and linked the amplifier to a small electric power source. These are hooked up to a collimator that they made out of a large cardboard tube with a hole at the end, which narrows the sound waves to a smaller area.

“My initial impression was that it wouldn’t work,” Mark, their adviser, said. “Some students take the safe path, but Viet and Seth took the higher-risk option.”

Both are set to graduate in May. Robertson has been working at the Defense Department and has been offered a job with the Air Force. Tran has interned at a Dulles, Va.-area aerospace firm with a promise of a job after graduation.

Although the students originally envisioned their device as a tool to attack kitchen fires and to eliminate the toxic monoammonium phosphate used in commercial fire extinguishers, they can see more uses: in confined areas in space, or wide areas outdoors, such as forest fires. Not having to use water or foam would be a bonus in many situations.

“We still want to do a lot more testing,” Tran said, “to see if we need to change the frequency [to extinguish] other” materials, before plunking down thousands of dollars to apply for a patent.

In 2012, the Defense Advanced Research Projects Agency conducted a project on “acoustic suppression of flame” and found that it worked on small levels but could not determine if it would work at “the levels required for defense applications,” the agency said.

Kenneth E. Isman, a clinical professor in the University of Maryland’s fire-protection engineering department, said that the question of scale is important. “It’s one thing to put out a tiny fire in a pan,” Isman said. “But how much power would you need to deal with a couch or bed on fire, which is a common scenario in deadly fires?”

The project also would have to address different types of fires — solid combustibles such as wood, paper or metals, or electrical equipment — and keep a fire from reigniting.

“One of the problems with sound waves is that they do not cool the fuel,” Isman said. “So even if you get the fire out, it will rekindle if you don’t either take away the fuel or cool it.” 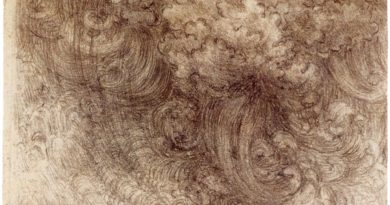